and more...
Support
Help
How to get help
Discussion group
FAQ
Service packs
Mozart 15
Mozart 14
All versions
About us
About us
Our aims
About the author
Contact us
Community
Discussion group
Some Mozartists
In education
Early Music Festival
Sales
Buy Mozart now!
Pricing information Try Mozart free

The North Cheshire Concert Band (now North Cheshire Wind Orchestra) is a symphonic wind ensemble based in Warrington. From time to time it finds itself playing from scores and parts produced with MOZART! David and Margaret, of Mozart Music Software, were members from 1987 to 2003.

There is more information about the band on the North Cheshire Wind Orchestra web site. 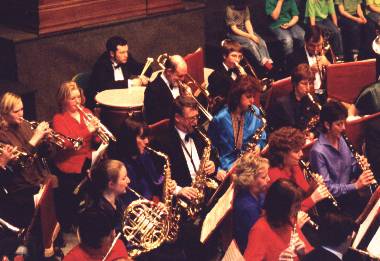 The North Cheshire Concert Band performing at the Parr Hall, Warrington, in November 1997.
The author of MOZART is to be seen in the middle on alto sax - concentrating on something other than MOZART for once!
This is a family activity with wife Margaret ("if you can't beat them join them") on tenor (rightmost sax in shot) and son Tom on trombone (middle of the three). 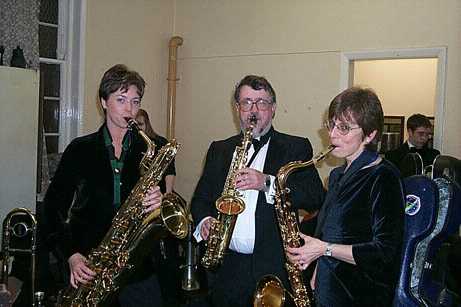 The official photo shoot: the North Cheshire Concert Band at its 3rd annual rehearsal weekend
away from it all at Canolfan Conwy on Anglesey   (February 2000)